33 live music shows to choose from tonight through Sunday (see weekend live music lineup here).  Oops, make that 32 (unless you already have tickets to Overboard’s sold out show at Old Sloop tomorrow night).    Here’s a taste of what you’re missing if you don’t:

Tonight’s music lineup is killer and includes KBMG @ Dog Bar featuring Dave Brown on guitar.  Just in case you forgot who Gloucester’s greatest guitarist is, here they are at Celebrate Gloucester 2010 (with Nelson Bragg  on percussion): 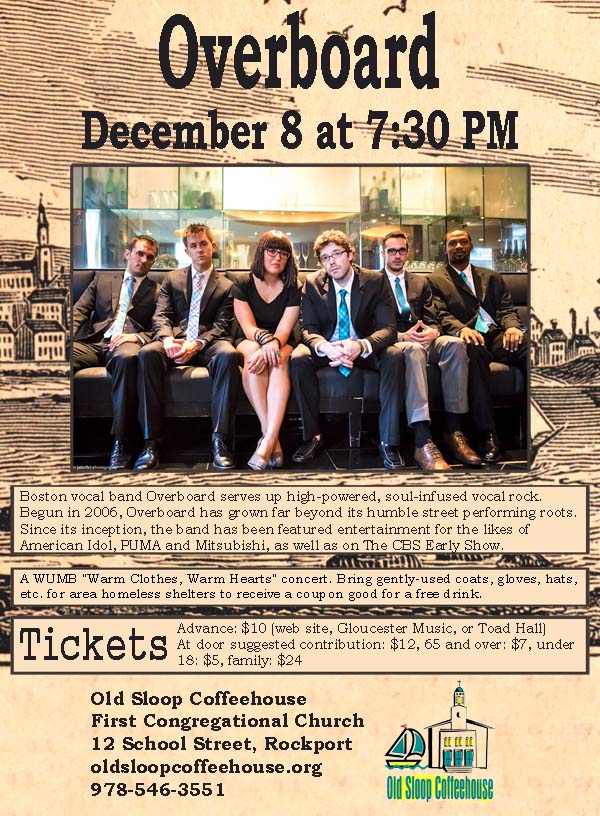 The award-winning Boston-based a cappella men’s singing group Overboard will be performing in Gloucester again  – this time a holiday concert with special guests on Sunday, Dec. 5, at 2 p.m., at the Meetinghouse in the Gloucester Unitarian Universalist Church on Middle Street.

Overboard was last on Cape Ann in July, when the six-member group, directed by Nick Girard, staged a five-part concert series at the Unitarian Universalist Church and built a local following.

“We are thrilled by the reception we got in Gloucester , and the wonderful acoustics in the UU church make our performances there even more exciting,” Girard said .

Formed in 2006 as a street performance group, Overboard quickly built its reputation in concert venues throughout New England and in five recorded albums. The group’s most recent album, Help!, was issued earlier this year with reinterpretations of over 40 Beatles songs and sounds and 23 original arrangements.

Help! has been nominated for two Contemporary A Cappella Award honors and for eight other A Cappella Community Awards.

Renowned among musicians and audiences for its acoustics, the Gloucester Unitarian Universalist Church, built in 1805, is recognized by the National Register of Historic Places and an iconic landmark on the city’s skyline. The church is at of Middle and Church Streets, one block off Gloucester ’s Main Street/West End shopping district.

Tickets for Overboard’s Dec. 5 Gloucester concert are $10 ($5 for students or seniors) and are available at the door.

There are only two chances left to see these cute
guys and hear their wonderful voices. The crowds
have been increasing and many people say "I’m
going to tell my friends about this group:
they’re great!" 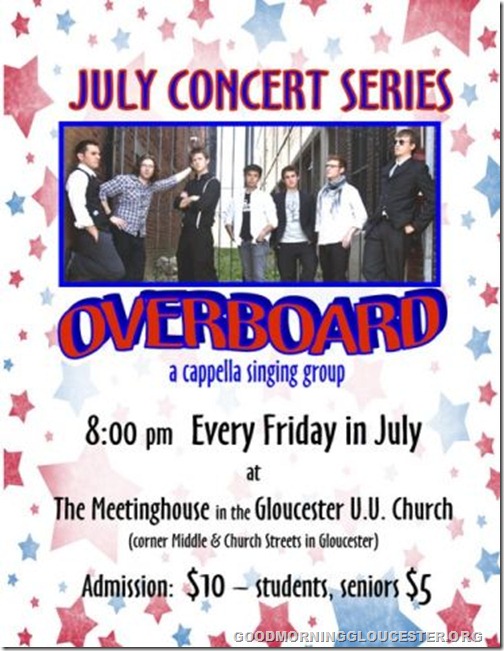