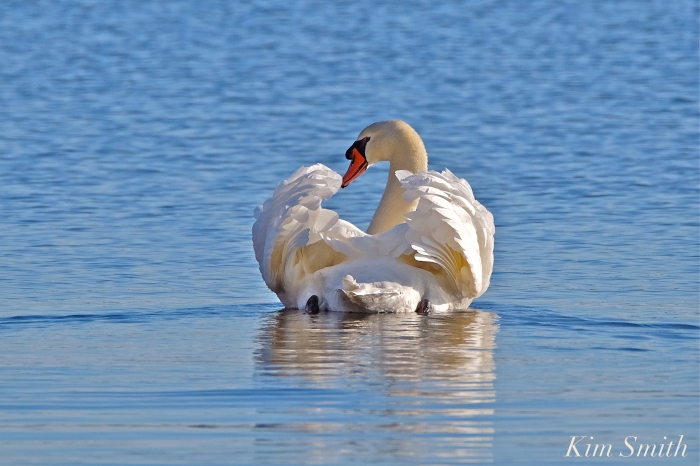 Mr. Swan busking, a thing swans do to look twice as large and threatening.

Cape Ann’s beautiful blue-eyed swan is doing quite well especially considering he is at least 28 YEARS OLD. It is highly unusual for a Mute Swan to live that long. Wild Mute Swans live on average eight to twelve years. In captivity, they can live up to 40 years, but our Mr. Swan hardly lives the cushy life of a Queen’s swan.

He is only occasionally a little gimpy on his bad leg. Mr. Swan still manages to rule most of Cape Ann’s waterways, from the Annisquam River to Rockport Harbor, and everything in between. 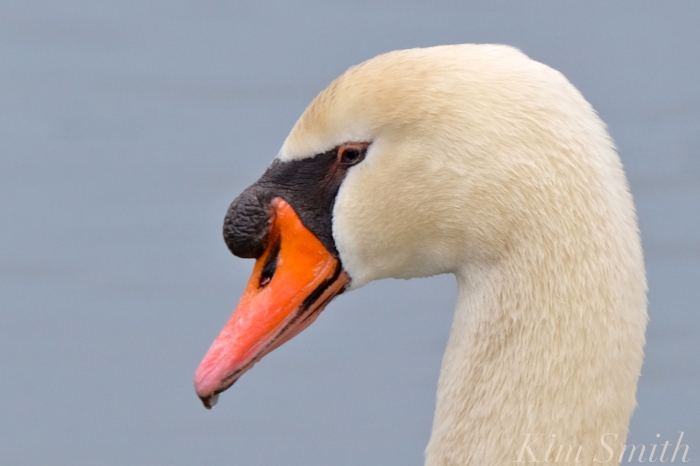 A number of friends have been texting and emailing that they are seeing a swan all along the Annisquam. I suspected that it was Mr. Swan as I have seem him on the Annisquam, near the bridge and Cape Ann Marina after he lost his second mate. It would be swan-logical that he would head over to the Annisquam in search of open, fresh water because both Henry’s and Niles ponds are still frozen.

Thanks to Craig Kimberley, who texted a swan sighting in real time, I was able to get a closeup of the swan, and YES, it is Mr. Swan that many of our readers are seeing. Mr. Swan’s bill is uniquely marked and he has beautiful blue eyes, which is unusual for most Mute Swans seen in these parts. In the closeup photo above it is difficult to tell his eyes are blue. It’s much easier to notice when his eyes reflect sunlight, but trust me, if it were a black-eyed swan, you would not be able to distinguish the iris at all.

Thanks so much to Craig, Brianne, and facebook friends for sharing your Mr. Swan sightings, so very much appreciated 🙂

The Annisquam River stretches from Annisquam Harbor on the north to Gloucester Harbor on south.

Glorious swan’s wings! In these photos you can see Mr. Swan’s magnificent new set of feathers.

Mr. Swan has resumed his habit of traveling from body of water to body of water within his territory. Why does he not travel during the summer months, primarily dwelling at Niles Pond? Swans molt each summer and during the molting period, they cannot fly.

Mute Swans molt when their cygnets cannot fly. The female (pen) begins to molt almost immediately after the young hatch. The male, or cob, waits until the female’s flight feathers have grown back completely. The reason for this staggered molting period is because swans use their wings in battle and to defend their young. The swan family will never be left defenseless with at least one of the pair’s set of wings fully functional. The molting period lasts anywhere from four to seven weeks.

Good morning Gloucester! Mr. Swan’s big morning stretch before he sets off to patrol his territory 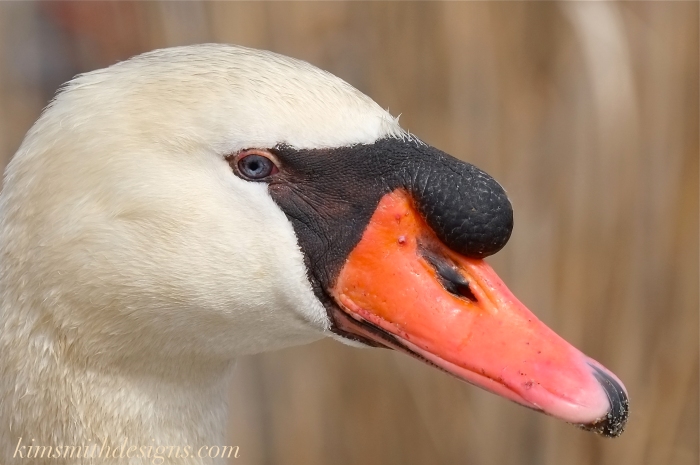 Recently, one of the very kind people who regularly feed our resident swan, Dominic Nesta, pointed out that Mr. Swan is unusual for his blue eyes. I was surprised by his comment because I’ve only ever filmed Mr. Swan, his deceased mate, and their offspring up close, and they all have (had) blue eyes. Aren’t all Mute Swans blue-eyed I wondered? After looking at hundreds of photos on Google images and reading dozens of descriptions, Mute Swans eyes appear as, and are always described as, black, whether they are the English Mute Swan or the Polish variant. 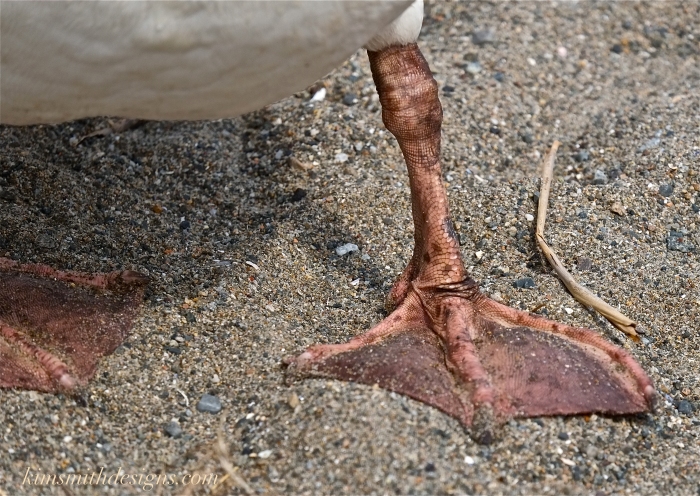 Mr. Swan is of the Polish kind. Polish Mute Swans are rarer, mostly pure white, and with pinkish gray feet, as opposed to the English sorts, which have black feet and legs. Hans Christian Anderson’s Ugly Duckling was perhaps logically written with the English Mute Swan cygnet in mind, which are typically dressed in a mottled gray downy coat. Polish Mute Swan cygnets are pure white. Until I learned the difference I wondered how there could ever be such a story as the Ugly Duckling because again, I had only ever seen Mr. Swan’s offspring, which have always been exceptionally beautiful perfect little balls of fluffy white down (gray cygnets aren’t ugly either, IMO).

A pigment deficiency of a gene in the sex chromosomes is what causes the whiteness (leucism). Polish Mute Swans were given their name when in 1800 they were introduced to London from the Polish coast on the Baltic Sea. They were at first thought to be a new species because of their unchanging color form (Cygnus immutabilis).

Our Mr. Swan is extraordinary not only for his long-lived life of well over twenty years, but also for his sapphire blue eye color.

Help needed from our readers–do you have a pair of swans in your area? If so, please email me at kimsmithdesigns@hotmail.com. Thank you very kindly.