It’s a little too cold and a little too early in the season for the Alewife to run, yet despite today’s 44 degree temperature, Gloucester’s new shellfish warden Tammy Cominelli shares that nine were counted from the Little River’s brand new counting station on Saturday!

Today marked the official opening of the station with Mayor Sefatia and members of SumCo eco contractors, NOAA, and the Mass Division of Marine Fisheries in attendance.

* Unfortunately, I did not get everyone’s name. Please let me know if you know the names of the gentleman in the far back row and the gentleman to the far right. Thank you!

In Massachusetts, the Alewife run between late March through May (when the water temperature is 51 degrees) and Blueback Herring run from late April through June (57 degrees); both species use the Little River to spawn at the freshwater Lily Pond.

The river herring begin their spring journey by swimming from the Atlantic Ocean, traveling through the Little River brackish, marshy basin. 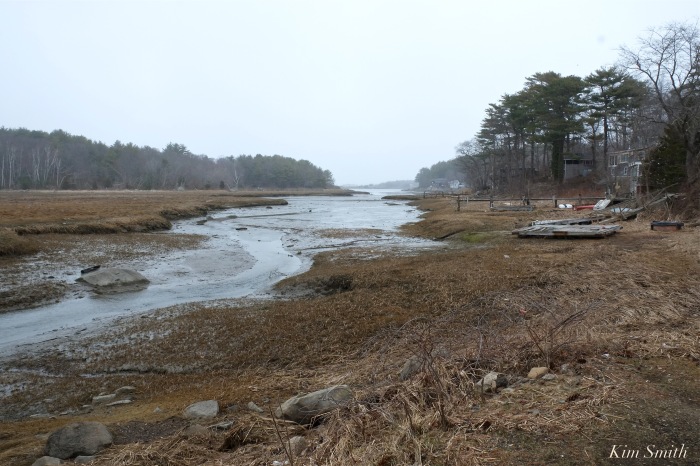 River herring travel upstream to the little pool just below the Lily Pond, where they then swim up the new ladder, called an Alaskan sea pass, to spawn.

Great morning learning more about the restoration of the Little River herring run, a team effort by the city of Gloucester @sefi62, @noaafisheries, Sum Co eco contractors, and Mass Division of Marine Fisheries. This metal ladder is called an Alaskan sea pass. They are adjustable, built off site, and installed on location.

Here the adults will stay for about three to six weeks. Unlike salmon, which spawn and die, river herring that survive spawning take the return trip back to the sea.

After the baby herring hatch, they live at the Lily Pond anywhere from one to three months. Once they have grown large enough, the young herring begin their journey to the Atlantic Ocean, first migrating down to the Little River basin, which is a mixture of both fresh and sea water, and then slowly out to the open sea to join large schools of Alewife and Blueback Herring.

River herring return to their home river to spawn once they become adults, in three to five years.