Thinking of those dealing with no power, evacuation and such destructive, icy flooding.

Rocks have clear icy layers and crunch pack, some pockets of drift 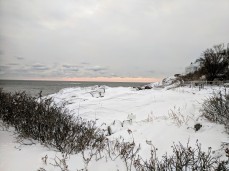 I’m following up on yesterday’s post, which was stopped midstream as we lost power. Scroll below for quick snaps and videos from my walk to Good Harbor Beach, Long Beach, and side streets.

Good Harbor Beach on sand looking out to Salt Island (from Good Harbor Beach Inn side of beach) Yes, the waves were rolling over the wall up to the homes but infrequently at this time. I don’t know what it was like at high tide.

(more Good Harbor Beach and Long beach below the break)

My boots really are waterproof. Still, had to move back. Roughly same spot: this one pans right to show direction of Bass Rocks

you can hear the birds over the wind

On high grounds people were shoveling and snowplowing, and some car roofs were only lightly dusted.  How different this storm was street to street! The photographs and video I took during the storm were at 2PM–two to three hours after high tide. Earlier that day, in the neighborhood between Long Beach and Good Harbor Beach, the skies were more dark gray-out than white out, with wind driven snow gusting out to sea. At that time tide, slush and waves reached the Long Beach walkway wall, sometimes splashing up and over into yards. I did not see what it was like at high tide. We did feel that the waves on the ocean were not as scary as storms we’ve been through, ones where the tides came rushing down the street and waves rose house high. Where water flooded the streets it was knee high and thick slush. I did not wade through them: the sound of generators meant power was out and who knows where lines were down. The marsh at the intersection of Thacher Road and the Good Harbor Beach parking lot (which was deep in water) did not hit the road. It feels much colder today. We are keeping our eyes on the incoming high tide.