How exciting to follow news about this stunning vocalist and actress. Not at all surprised to hear that Katy Geraghty is part of a Broadway musical!

Katy On Broadway
A Gloucester woman is making her Broadway debut in a show that has racked up a number of Tony Award nominations. Katy Geraghty, a 2012 graduate of Gloucester High School and the daughter of city residents Rick and Martha Geraghty*, plays the role of Debbie in the acclaimed musical “Groundhog Day,” which opened April 17 at the August-Wilson Theater on New York’s 52nd Street…Geraghty, also a 2016 graduate of the University of Massachusetts Amherst, said she landed the role after being called to audition in March last year. She said she had caught the attention of “Groundhog Day” musical director David Holtzenberg, whose husband, Michael Heitzman, directed Geraghty in North Shore Music Theatre’s 2015 production of “Shrek, the Musical.” “Groundhog Day,” based on the 1993 film that featured Bill Murray, stars Andy Karl, best known for his role in “Legally Blonde,” and has been nominated for a Tony as best musical… 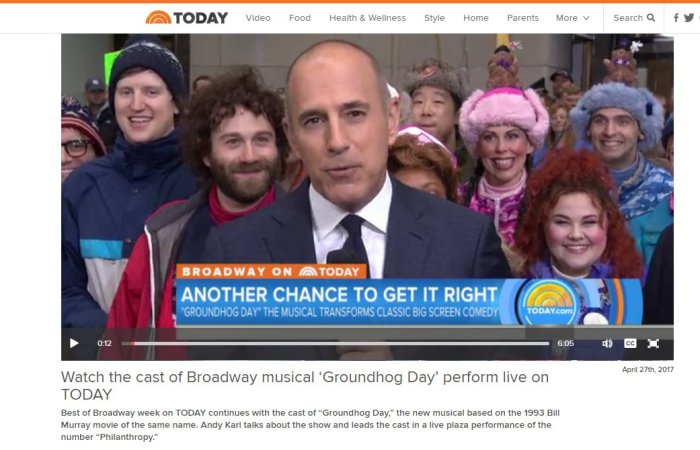