ALERT: Please skip this article if you are feeling the least bit squeamish.

Click on the Read More tab below the text to see all the photos.

Looking for Snow Buntings while walking alongside Niles Pond, I came around a bend in the road and noticed from a distance the head of a large bird pecking at something on the embankment. Hmmm, a hawk, that’s why there weren’t any birds to be found. Hawks swooping their territory overhead quickly clears the woods and puts the kibosh on photographing songbirds.

Inching forward, baby step by baby step, the hawk was broad and large, and with its beautiful rust-red tail feathers, I thought it was most likely a female Red-tailed Hawk. The females are 25 to 30 percent bigger than the males, and because this bird was definitely on the larger size, for the sake of our story, we’ll refer to the hawk as a female.

She was intently devouring a freshly killed bird and if she had not been very hungry, I doubt she would have allowed me to move in so close. At one point, after having nearly eviscerated the entire bird, she tried to lift and carry away the carcass with her claw-shaped talons (one of the last photos in the batch). She did not succeed and finding more body parts, continued to eat.

After a bit, some boisterous folks came up from behind, startling both the hawk and myself, and off she flew to the far side of the pond. I found a stick and turned the dead carcass over onto its back. The head was missing, but by looking at the black webbed feet as well as the chest and belly feathers, it quickly became apparent that the victim was a Great Cormorant. I am sad to say that I think it was the very same juvenile Great Cormorant that had been living at Niles Pond for the past month as I have not seen another since.

Red-tailed hawks are extraordinarily adept hunters and highly variable in their diet. Eighty percent of the Hawk’s prey is comprised of mammals. For example, mice, voles, squirrels, chipmunks, rats, and rabbits. Records indicate that they also eat songbirds, pigeons, shorebirds, and unbelievably so, female Wild Turkeys and pheasants. Now we can add Great Cormorant to the list. Red-tailed Hawks weigh approximately between 1.5 pounds to 3.2 pounds, female Wild Turkeys average 9 to 10 pounds, and Great Cormorants weigh 5 to 8 pounds.

There were birders in the neighborhood earlier that morning, the morning of the winter solstice, December 21st. I wonder if they saw the Hawk kill the Cormorant, or if the Hawk came upon the freshly killed bird and it had been taken down by another predator. If you were one of the birders watching the Hawk out on Eastern Point near Niles Pond, on December 21st, please write. Thank you so much! 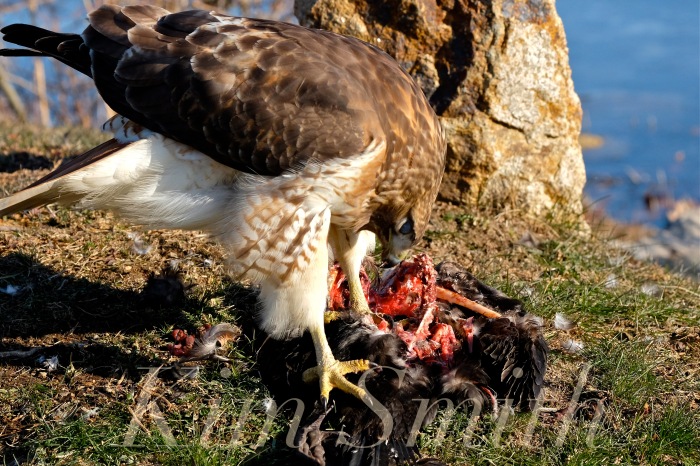 Attempting to carry off the partially eaten carcass 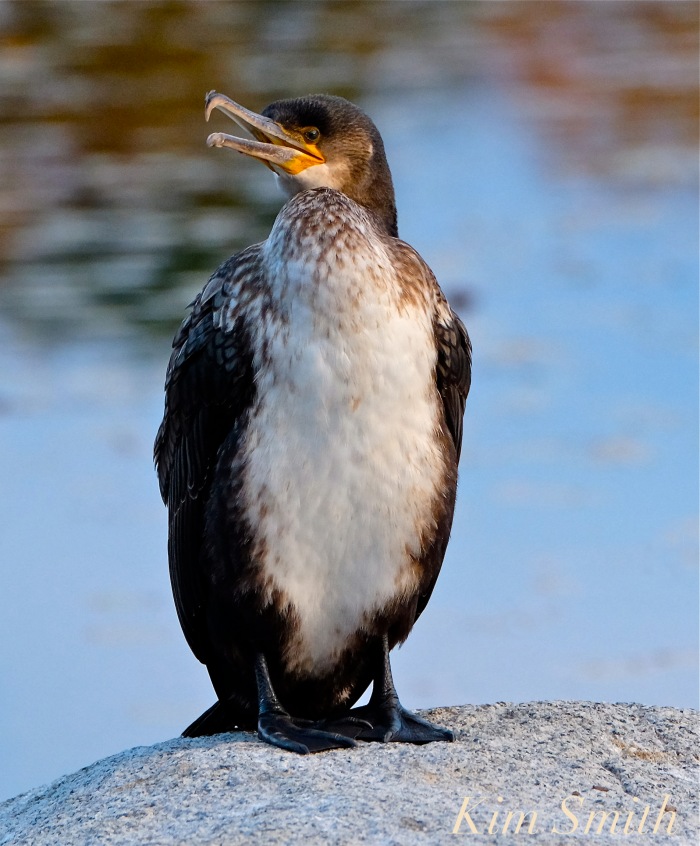