“The world breaks everyone and afterward many are strong at the broken places.” 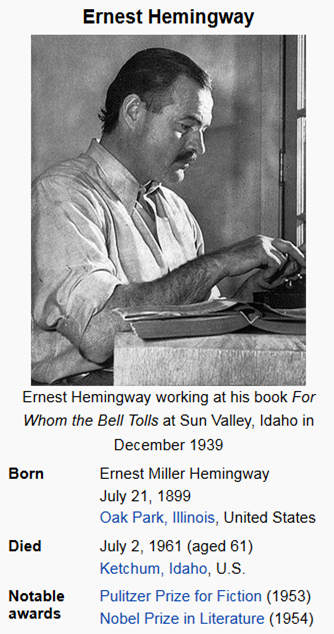 An Illinois native, Hemingway was among the most influential writers of the twentieth century. A volunteer ambulance driver, he was seriously wounded in World War I, and used the experience to write A Farewell to Arms, in 1929, from which the quote above is taken. A member of the “Lost Generation” of American expatriates in Paris, Hemingway’s exuberant lifestyle and four marriages made him the icon of a certain sort of mid-century male celebrity, famous for his African hunting and deep sea fishing.  After writing The Sun Also Rises, For Whom the Bell Tolls, and The Old Man and the Sea, he was awarded the Pulitzer Prize for Fiction in 1953, and the Nobel Prize for Literature in 1954. A long series of automobile and airplane crashes, fires and other accidents, coupled with alcoholism, left Hemingway in pain and suffering from depression. He committed suicide by shotgun at his ranch in Idaho in 1961.

The creator of goodmorninggloucester.org Lover of all things Gloucester and Cape Ann. GMG where we bring you the very best our town has to offer because we love to share all the great news and believe that by promoting others in our community everyone wins. View all posts by Joey Ciaramitaro