Most of you may already know this but I think it bears repeating because I am sometimes guilty of making the same mistakes repeatedly.

When searching for airfares for my winter vacations I start early, about three months ahead of time and I check the regular websites for the best deals on flights.  The main website I use is Kayak which gives you some pretty decent customization options as far as whittling down the exact flight times and non-stop flights so you can only be viewing flights that meet your criteria instead of 1000 or so flights that have 2 or more connections or are red-eyes.

I prefer early morning direct flight departures and mid day direct flight returns.  Kayak allows me to do searches for the exact flights that meet my criteria.

The searches can be then filtered by cheapest price or best times or shortest route.  The way I usually perform my search for the best flights is this-

Now I’ll check every other day or so until the flights I want come up within the prices that are reasonable to me.  For Florida this means direct flights at the right times for anything under $235 and for the Caribbean anything under $400.

Once I see those flights coming up I go directly to the airline’s site for which that fare is listed to se if it is listed for cheaper on the Airline’s website.  I figure that most times the airfare aggregator probably adds $10 or so to the costs to pay for their service.  some times it will be listed a little cheaper on the Airline’s website, sometimes not but it’s always good to check IMO.

Now here is the thing though that even I who I consider to be a pretty informed and savvy web travel person still to this day forget at times in the excitement to book a great deal.

Firstly there are the baggage fees that should be taken into consideration.

Here is an airline baggage fee chart from Kayak for reference-

So when comparing the two 9 times out of ten I will book the cheapest fare the way it is listed on the Kayak site but forget about the baggage fees. A $225 flight to Miami on American actually will cost you more than a $240 flight to Miami on Jet Blue if you check one bag, but it won’t be listed that way on either kayak or on the individual Airline’s respective websites. now $15 isn’t a whole lot but then if you consider that you might be flying with a partner or children and it turns out to be three checked bags that would be $45 each way equals $90.  Ideally you can travel light and avoid checked bags all together but in many instances that is just not a reality.

The next point that I would like to make is that not all airlines are created equal and some don’t have TV or Internet on them.  I don’t know about you but I would gladly pay an extra $30 for round trip airfare anywhere in the country that offered tv and/or internet in the seatbacks in front of you.

So now lets take the above instance of the flight to Miami on American for $225 which doesn’t have internet and only has a couple of TV’s in the middle of the aisles for which you may or may not have a decent view of and charges you an extra $25 for your checked bag.

$240 for a flight without a checked bag fee on a newer Jet Blue plane which offers wifi internet and individual TV’s in each seat is an absolute bargain.

Take your time when you are booking your flights and figure out what the baggage fees will be along with if the airline has wifi on your flight.  A flight to Vegas with internet access will literally FLY BY a whole lot quicker with the internet to distract you, I guarantee it. 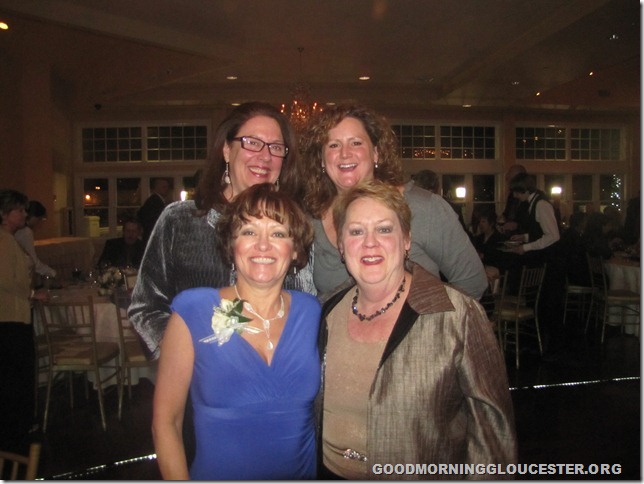 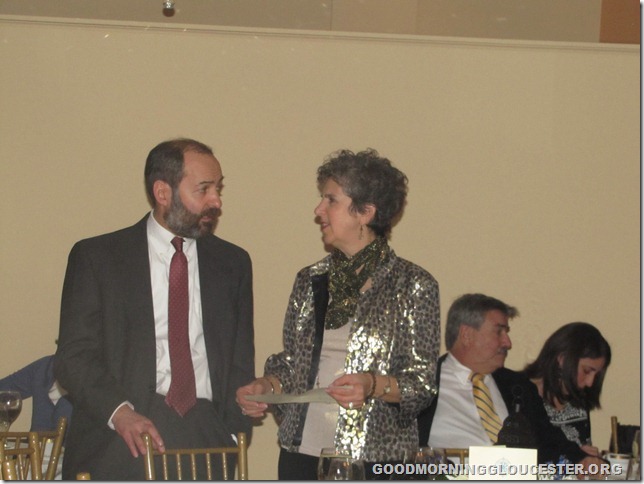 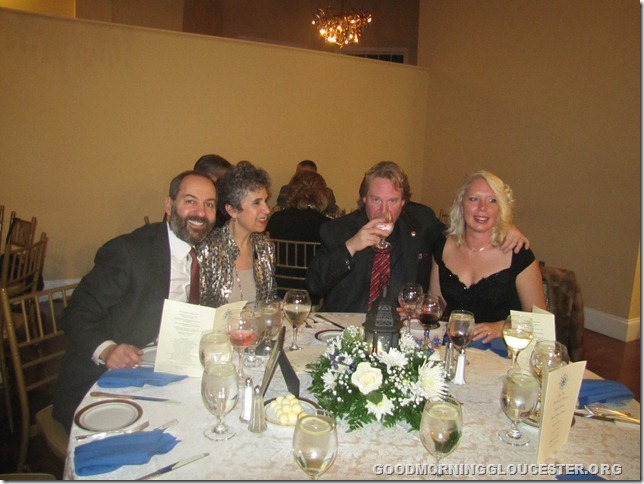 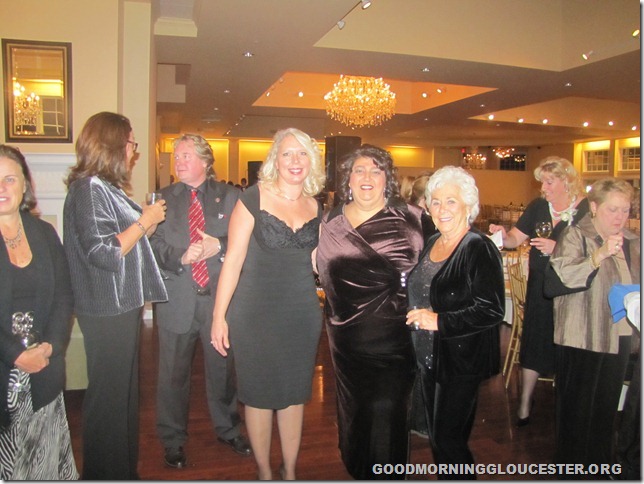 Great Blog! Love how you highlight local activities, art, businesses and lore! I now subscribe so as not to miss.

I especially love the photos! Thank you for all that you do for the community!!

Here are some photos I took that I thought you might enjoy:  ‘2011: From ‘balmy to blizzard’.   New Year’s Day felt surreal- so many people walking at good harbor, some barefoot, some in the water; very peaceful and happy scene.   The blizzard scene is in dogtown; nothing like a walk in the woods after a blizzard! (Just have to be careful of the rocks under the snow and falling ice and branches.  J )

Wishing you and your family good health and peace in 2011! May you enjoy much happiness and prosperity.     Karen 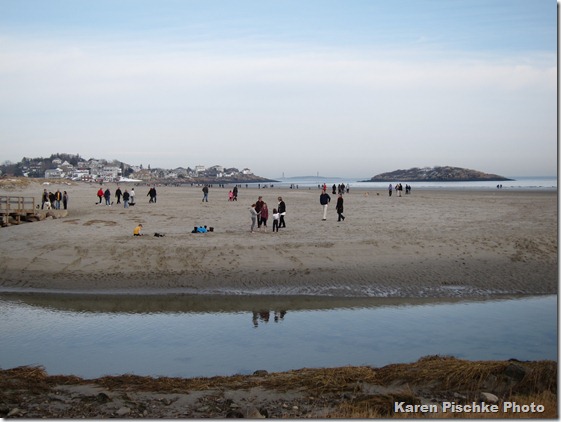 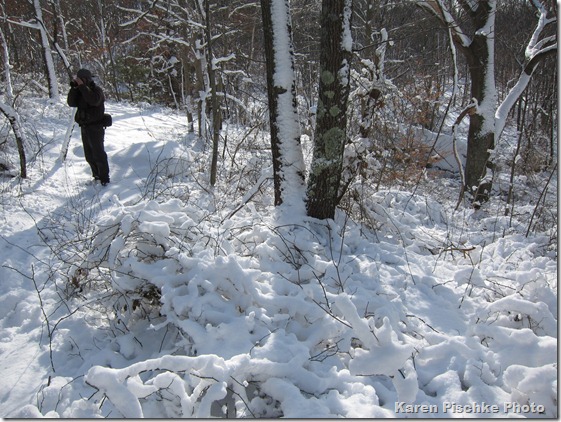 This guy was absolutely hammered at Rehab.

That a buoy is a floating device that can have many different purposes? It can be anchored (stationary) or allowed to drift.  Some types of buoys are: sea mark (channel and hazard markers), lifebuoy (in case you fall off the boat), decompression (deployed by submerged divers to mark their position underwater while doing decompression stops), mooring (to tie your boat to),  and lobster trap.

Lobster trap buoys are brightly colored buoys used for the marking of lobster trap locations so lobstermen can find their lobster traps? Each lobster fisherman has his or her own color markings or registration numbers so they know which ones are theirs. They are only allowed to haul their own traps and must display their buoy color or license number on their boat so law enforcement officials know what they should be hauling. The buoys are brightly colored with highly visible numbers so they can be seen under conditions when there is poor visibility like rain, fog, sea smoke, etc.

The word buoy can also be used figuratively. For example, a person can buoy (lift up) someone’s spirits by providing help, empathy, or an enjoyable GMG post.  Hope your spirits were buoyed today by this orange toothed buoy smile.

Anatomy Of A Lobster Buoy Video With Johnny “Doc” Herrick 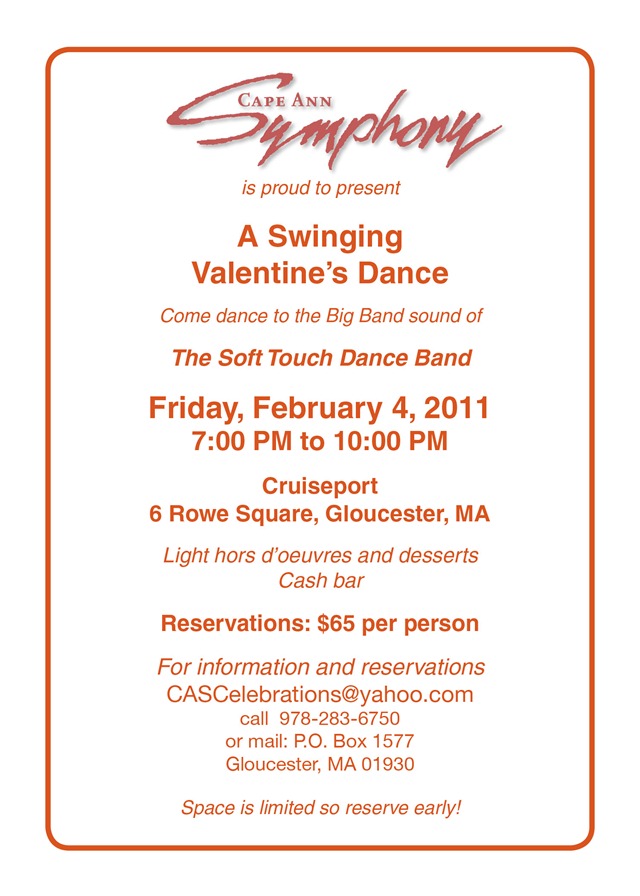 This is the type of thing that if we win can be used in marketing all over the world. Won’t you vote for your favorite city?

Hi Joey. Can this be posted on GMG?

Vote for Gloucester and You Could Win $500

seARTS has succeeded in getting Gloucester nominated in the small city category of the annual Top 25 Arts Destinations Edition of AmericanStyle, the nation’s premier art lovers’ magazine. Click on the link to cast your vote and you’ll be eligible for a $500 cash prize!

The first Business After Hours (formerly Evening Business Exchange) gathering will be this Wednesday, January 19th at the Windward Grille in Essex.
The event will start at 5 p.m. and will conclude at approximately 7 p.m. Cost is $10 for members and $20 for non-members. Come say hello to your fellow Cape Ann Chamber members or maybe meet a new business client. Door prizes, great food and a chance to warm up on a mid-winter night!!!
For further information contact me at the Chamber office through email or phone (978) 283-1601. Look forward to seeing you Wednesday at the Windward Grille!
Tim 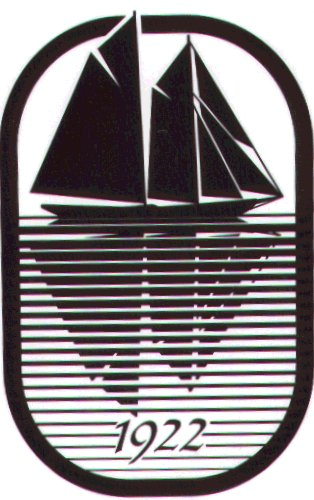 We’ll highlight what Discover Gloucester, in it’s third year, is doing as a volunteer effort to bring visitors and their dollars into the community. Honored guest speakers are Senator Bruce Tarr and Julie McConchie, the Executive Director of the North of Boston Convention and Visitor Bureau. 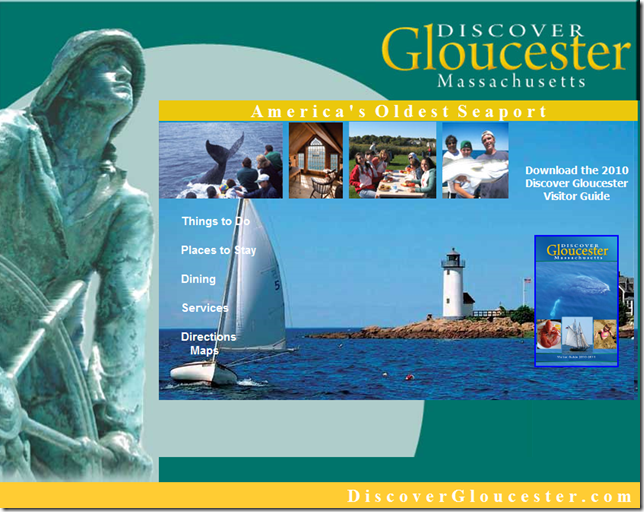 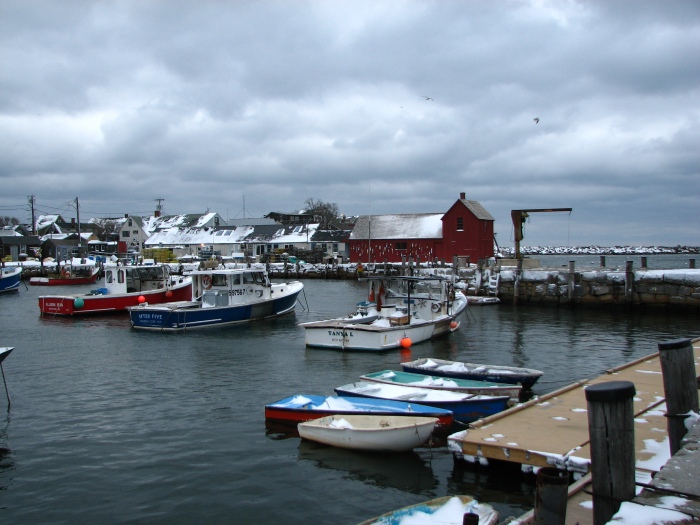 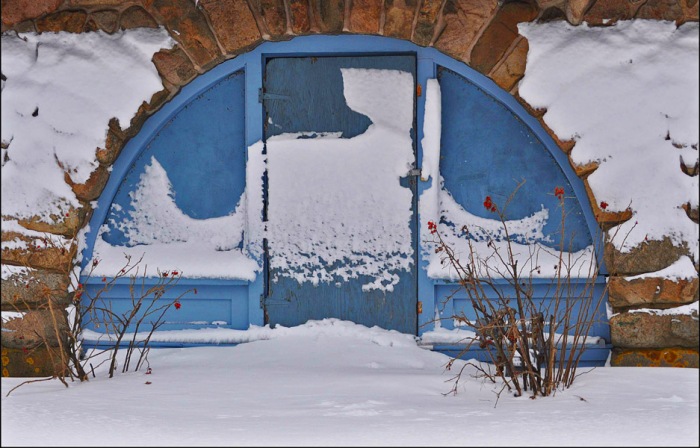 My co-worker from China, Amphy, sent me the photo we took at Man at the Wheel. Though she didn’t have the GMG sticker to represent, I can vouch that she did indeed come to visit from China, based on the post from November, "Margaret Lee Representing! from Shenzhen, Guangdong, China." I’ve attached our co-workers group photo, and Amphy Chen is second from right.

China Folk Up In The Hizzy!- 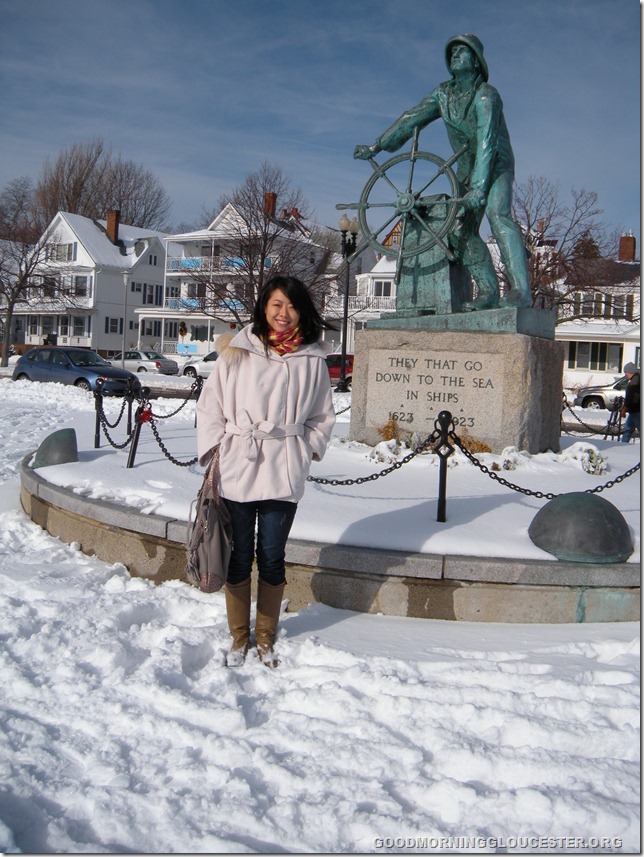 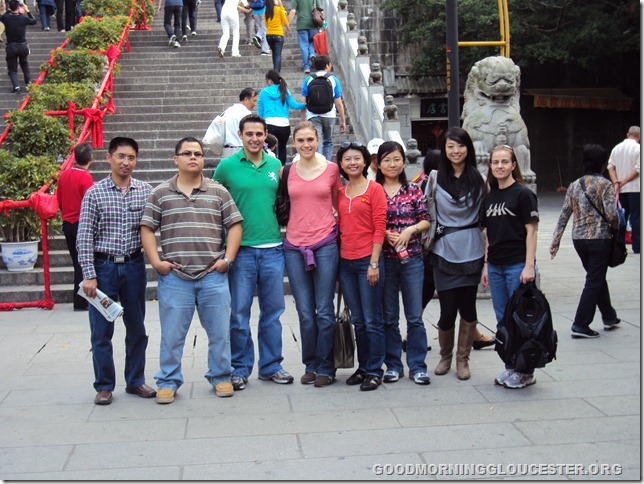 Every year in late December/Early January, we have a seal show up in the cove that loves to hang out on top of the moraine boulder that is visible in Wonson Cove at low tide, but covered by water a high tide.  I’m can’t be sure if it’s always the same seal, but the behavior is always the same.  He will hang around on top of the boulder for hours and leave when the rock is half exposed by the tide.  He’ll stick around for a couple of weeks and then he’ll disappear. I’m thinking he’s gorging on urchins, then moving on.  When he comes back the following year, the urchins have rebounded.  Hopefully I’ll be able to get some photos in the future to use as comparison from year to year.

Anyhow, whether the seals are the same one or not from year to year, we’re calling him Rocky. 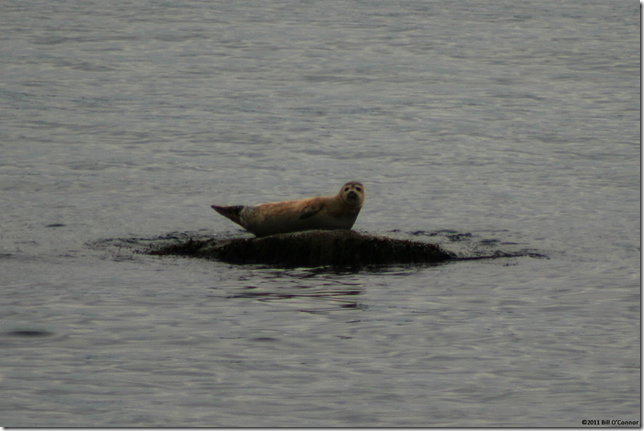 Here are my photos-

Damon Cummings speaks of a certain seal that follows him down the harbor each day he rows in the dory.  Could possibly be the same one.